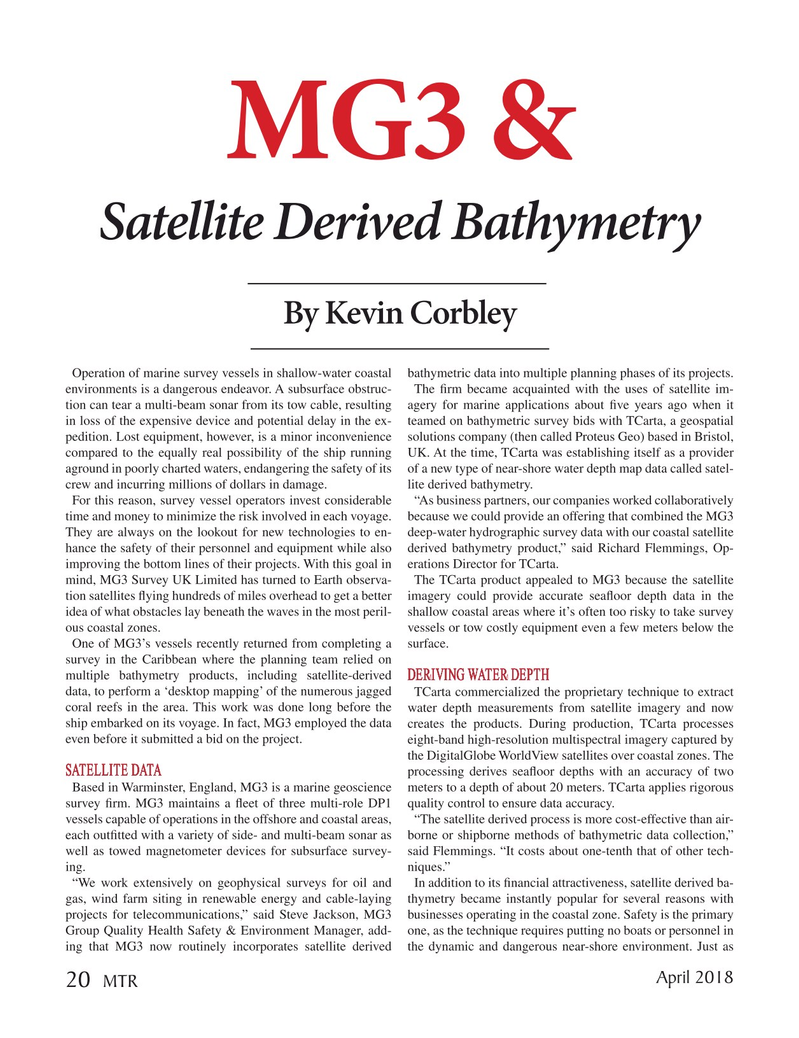 environments is a dangerous endeavor. A subsurface obstruc- The ? rm became acquainted with the uses of satellite im- tion can tear a multi-beam sonar from its tow cable, resulting agery for marine applications about ? ve years ago when it in loss of the expensive device and potential delay in the ex- teamed on bathymetric survey bids with TCarta, a geospatial pedition. Lost equipment, however, is a minor inconvenience solutions company (then called Proteus Geo) based in Bristol, compared to the equally real possibility of the ship running UK. At the time, TCarta was establishing itself as a provider aground in poorly charted waters, endangering the safety of its of a new type of near-shore water depth map data called satel- crew and incurring millions of dollars in damage. lite derived bathymetry.

For this reason, survey vessel operators invest considerable “As business partners, our companies worked collaboratively time and money to minimize the risk involved in each voyage. because we could provide an offering that combined the MG3

They are always on the lookout for new technologies to en- deep-water hydrographic survey data with our coastal satellite hance the safety of their personnel and equipment while also derived bathymetry product,” said Richard Flemmings, Op- improving the bottom lines of their projects. With this goal in erations Director for TCarta.

mind, MG3 Survey UK Limited has turned to Earth observa- The TCarta product appealed to MG3 because the satellite tion satellites ? ying hundreds of miles overhead to get a better imagery could provide accurate sea? oor depth data in the idea of what obstacles lay beneath the waves in the most peril- shallow coastal areas where it’s often too risky to take survey ous coastal zones. vessels or tow costly equipment even a few meters below the

One of MG3’s vessels recently returned from completing a surface.

survey in the Caribbean where the planning team relied on multiple bathymetry products, including satellite-derived

DERIVING WATER DEPTH data, to perform a ‘desktop mapping’ of the numerous jagged TCarta commercialized the proprietary technique to extract coral reefs in the area. This work was done long before the water depth measurements from satellite imagery and now ship embarked on its voyage. In fact, MG3 employed the data creates the products. During production, TCarta processes even before it submitted a bid on the project. eight-band high-resolution multispectral imagery captured by the DigitalGlobe WorldView satellites over coastal zones. The processing derives sea? oor depths with an accuracy of two

Based in Warminster, England, MG3 is a marine geoscience meters to a depth of about 20 meters. TCarta applies rigorous survey ? rm. MG3 maintains a ? eet of three multi-role DP1 quality control to ensure data accuracy.

vessels capable of operations in the offshore and coastal areas, “The satellite derived process is more cost-effective than air- each out? tted with a variety of side- and multi-beam sonar as borne or shipborne methods of bathymetric data collection,” well as towed magnetometer devices for subsurface survey- said Flemmings. “It costs about one-tenth that of other tech- ing. niques.” “We work extensively on geophysical surveys for oil and In addition to its ? nancial attractiveness, satellite derived ba- gas, wind farm siting in renewable energy and cable-laying thymetry became instantly popular for several reasons with projects for telecommunications,” said Steve Jackson, MG3 businesses operating in the coastal zone. Safety is the primary