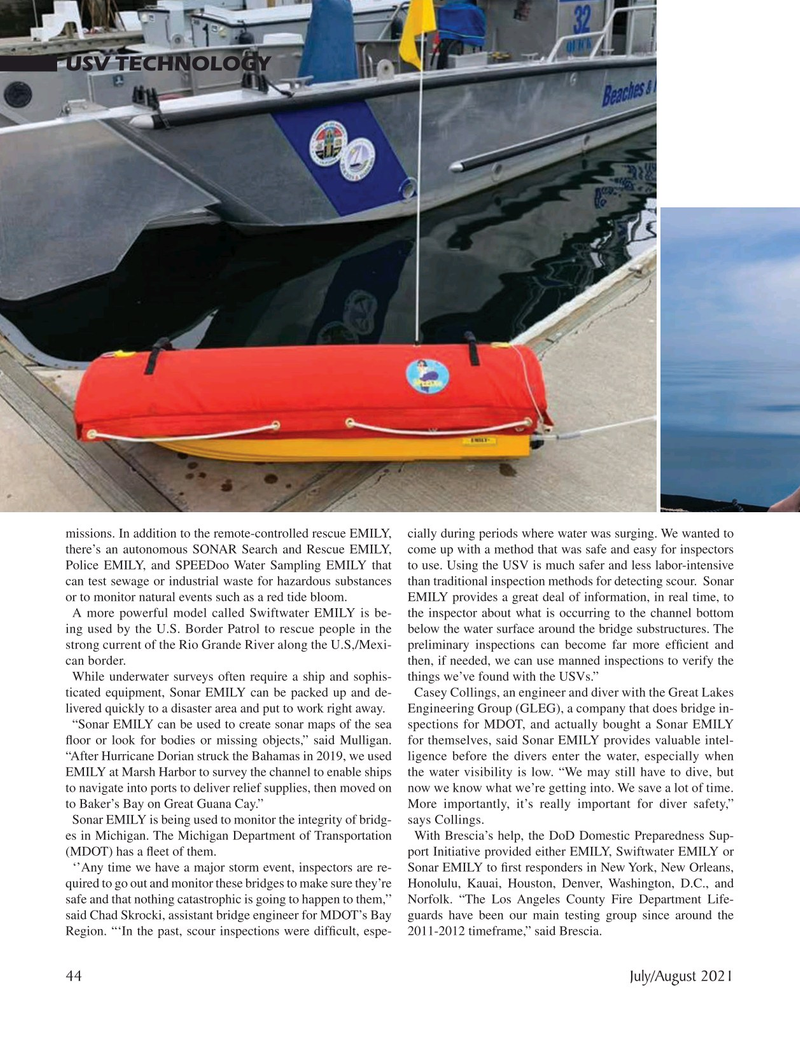 USV TECHNOLOGY missions. In addition to the remote-controlled rescue EMILY, cially during periods where water was surging. We wanted to there’s an autonomous SONAR Search and Rescue EMILY, come up with a method that was safe and easy for inspectors

Police EMILY, and SPEEDoo Water Sampling EMILY that to use. Using the USV is much safer and less labor-intensive can test sewage or industrial waste for hazardous substances than traditional inspection methods for detecting scour. Sonar or to monitor natural events such as a red tide bloom. EMILY provides a great deal of information, in real time, to

A more powerful model called Swiftwater EMILY is be- the inspector about what is occurring to the channel bottom ing used by the U.S. Border Patrol to rescue people in the below the water surface around the bridge substructures. The strong current of the Rio Grande River along the U.S,/Mexi- preliminary inspections can become far more ef? cient and can border. then, if needed, we can use manned inspections to verify the

While underwater surveys often require a ship and sophis- things we’ve found with the USVs.” ticated equipment, Sonar EMILY can be packed up and de- Casey Collings, an engineer and diver with the Great Lakes livered quickly to a disaster area and put to work right away. Engineering Group (GLEG), a company that does bridge in- “Sonar EMILY can be used to create sonar maps of the sea spections for MDOT, and actually bought a Sonar EMILY ? oor or look for bodies or missing objects,” said Mulligan. for themselves, said Sonar EMILY provides valuable intel- “After Hurricane Dorian struck the Bahamas in 2019, we used ligence before the divers enter the water, especially when

EMILY at Marsh Harbor to survey the channel to enable ships the water visibility is low. “We may still have to dive, but to navigate into ports to deliver relief supplies, then moved on now we know what we’re getting into. We save a lot of time. to Baker’s Bay on Great Guana Cay.” More importantly, it’s really important for diver safety,”

Sonar EMILY is being used to monitor the integrity of bridg- says Collings.

es in Michigan. The Michigan Department of Transportation With Brescia’s help, the DoD Domestic Preparedness Sup- (MDOT) has a ? eet of them. port Initiative provided either EMILY, Swiftwater EMILY or ‘’Any time we have a major storm event, inspectors are re- Sonar EMILY to ? rst responders in New York, New Orleans, quired to go out and monitor these bridges to make sure they’re Honolulu, Kauai, Houston, Denver, Washington, D.C., and safe and that nothing catastrophic is going to happen to them,’’ Norfolk. “The Los Angeles County Fire Department Life- said Chad Skrocki, assistant bridge engineer for MDOT’s Bay guards have been our main testing group since around the